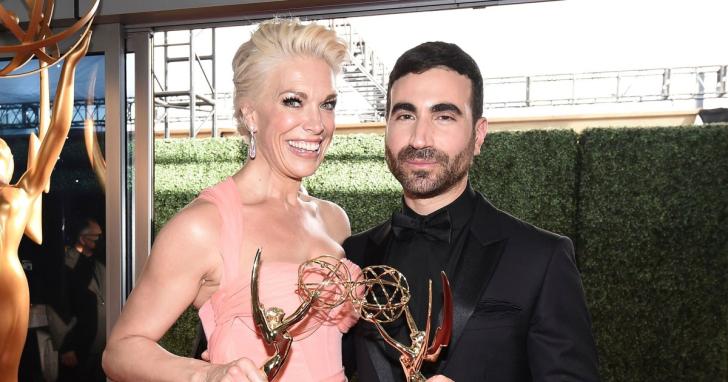 What a goal! Ahead of Ted Lasso’s impressive 20 nominations at the 2021 Emmy Awards, the stars stepped out in style on the red carpet on Sunday, September 19.

Show star and nominee Jason Sudeikis walked the red carpet in a dapper velvet tux, while Hannah Waddingham and Juno Temple proved to be BFF goals as they posed for a kiss for photographers.

“I would say this show’s about family, mentors and teachers, this show’s about teammates and I wouldn’t be here without those three things in my life,” Sudeikis noted before thanking his parents, siblings, friends, teachers and kids — Otis, 7, and Daisy, 4, whom he shares with ex Olivia Wilde. “I want to thank Lorne [Michaels], who went to go take a dump now, so perfect. … It means the world to me to be up here and just be a mirror of what you guys give to me and we reflect back and forth on each other.”

Waddingham, 47, earned the first trophy of the night for Outstanding Supporting Actress in a Comedy with an enthusiastic acceptance speech.

“Jason, you changed my life with this, and more importantly my baby girl’s [life]. … Honestly I’m so privileged to work with you, I really am,” Waddingham, 47, said in her acceptance speech. “Oh, my god, I’m giving a speech at the Emmys!”

The English actor also took a moment to gush over the 32-year-old Killer Joe actress: “Juno Temple, I swear to God if I could break off a one of [the trophy’s] arms to give it to you because that what you are to me, there’s no Rebecca without Keely,” Waddingham exclaimed to cheers from the audience. “And if you ever leave my life, I’m going to stalk you.”

Following her victory, Waddingham embraced the Saturday Night Live vet in a brief hug as the CBS broadcast cut to the next segment.

The merriment continued for the Apple series as Brett Goldstein won the award for Outstanding Supporting Actor in a Comedy.

“I was very, very specifically told I’m not allowed to swear,” Goldstein, 41, noted upon his acceptance before being bleeped out for profanities. “So, thank you Warners, thank you Apple, thank you to the team. To my teammates that are nominated with and all my teammates, this cast makes me sick, they are so good. … Lastly, I want to say, to Jason, Bill, Brendan and Joe Kelly, thank you for creating this show and for inviting me to be part of it. It has been one of the greatest honors, privileges and privileges — I just said that twice — but it’s a double privilege, it’s the most privileged privilege and pleasures of my life.”

Earlier this year, the Apple series scored big at both the Golden Globes and Screen Actors Guild ceremonies, with the We’re the Millers star winning honors for his role as the soccer coach, though his two kids weren’t as impressed.

“Their reaction is completely selfish,” Sudeikis joked to reporters after accepting the Golden Globe in February. “The way they want to celebrate is by having, you know, Coco Pops cereal — or Cocoa Puffs. I … It’ll have nothing to do with me because again, they’re six and four, and they’re selfish little demons. I can’t believe they’re not going to give me any respect.”

Scroll below to see the Ted Lasso cast’s best looks from the Emmys: