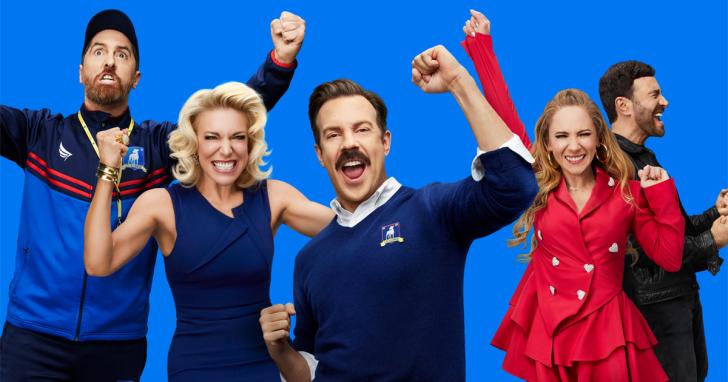 “While Ted Lasso taught us to believe that anything is possible, we are so genuinely moved that this has culminated in such a historic night for both Apple TV+ and the cast and crew of this special series,” said Zack Van Amburg, Apple’s head of Worldwide Video. “Thank you to the Television Academy for these honors and congratulations to all of our storytellers — both behind and in front of the camera — who have worked so tirelessly to bring unique perspectives to global audiences over this past year, delivering hope, light, humor, and compelling stories when we needed it most.”

“What Jason, Bill, Brendan, Joe, and the entire creative team and cast of ‘Ted Lasso’ have accomplished within just one season speaks to the power of the intricately crafted storytelling that continues to inspire and uplift audiences all over the world,” said Jamie Erlicht, Apple’s head of Worldwide Video. “This recognition from the Television Academy is a testament to their tremendous talents, and we send our heartfelt congratulations to Team Lasso for their achievements.”

After leading the pack with the most-nominated series regulars ever for a freshman comedy, first-time nominees and stars Jason Sudeikis, Hannah Waddingham, and Brett Goldstein nabbed their first-ever Emmy Awards. Star and executive producer Sudeikis also became the first lead actor in a freshman comedy series to be honored with awards for both a lead performance and best series for a freshman comedy. “Ted Lasso” casting director Theo Park also earned the award for Outstanding Casting for a Comedy Series.

At last week’s ceremony for the Creative Arts Emmy Awards, Apple landed seven Emmy Awards, including three for “Ted Lasso.” Apple TV+ also made history by becoming the first streaming service to win the Emmy for Outstanding Documentary or Nonfiction Special in its first two years of eligibility for the acclaimed Apple Original documentary “Boys State.”

In 2021, Apple scored 11 Primetime Emmy Awards in the following categories:

Jason Sudeikis is Ted Lasso, an American football coach hired to manage a British soccer team — despite having no experience. But what he lacks in knowledge, he makes up for with optimism, underdog determination — and biscuits. The widely acclaimed series also stars Hannah Waddingham, Brendan Hunt, Jeremy Swift, Juno Temple, Brett Goldstein, Phil Dunster, and Nick Mohammed. Sarah Niles joins the cast this season as Sharon, a sports psychologist who has been brought in to work with AFC Richmond.

In addition to starring, Sudeikis serves as executive producer, alongside Bill Lawrence via his Doozer Productions, in association with Warner Bros. and Universal Television, a division of Universal Studio Group. Doozer’s Jeff Ingold also serves as an executive producer, with Liza Katzer as co-executive producer. The series was developed by Sudeikis, Lawrence, Hunt, and Joe Kelly, and is based on the pre-existing format and characters from NBC Sports.

Apple TV+ is available on the Apple TV app in over 100 countries and regions, on over 1 billion screens, including iPhone, iPad, Apple TV, Mac, popular smart TVs from Samsung, LG, Sony, VIZIO, TCL, and others, Roku and Amazon Fire TV devices, Chromecast with Google TV, PlayStation and Xbox gaming consoles, and at tv.apple.com, for $4.99 per month with a seven-day free trial. For a limited time, customers who purchase and activate a new iPhone, iPad, Apple TV, Mac, or iPod touch can enjoy three months of Apple TV+ for free.1

For more information, visit apple.com/tvpr and see the full list of supported devices.

Apple revolutionized personal technology with the introduction of the Macintosh in 1984. Today, Apple leads the world in innovation with iPhone, iPad, Mac, Apple Watch, and Apple TV. Apple’s five software platforms — iOS, iPadOS, macOS, watchOS, and tvOS — provide seamless experiences across all Apple devices and empower people with breakthrough services including the App Store, Apple Music, Apple Pay, and iCloud. Apple’s more than 100,000 employees are dedicated to making the best products on earth, and to leaving the world better than we found it.