AZ Snake Pit
Share on FacebookShare Share on TwitterTweet
You can’t stop Tim Locastro. You can’t even try to contain him. Unless you’re physically pushing his hand off the base. 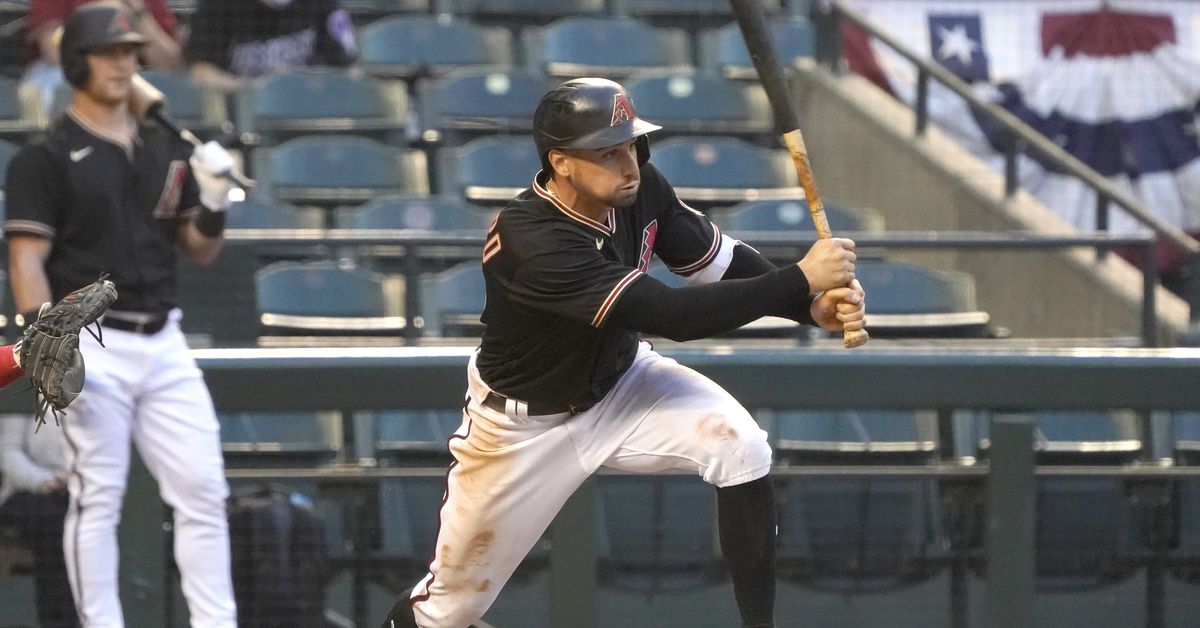 [D’backs.com] HOF cleats, ‘dream’ 1st start key D-backs ‘W’ - Speed is the name of the game for Locastro, who has been Major League Baseball’s fastest player over the past two seasons per Statcast’s sprint speed metric. Getting on base and wreaking havoc is the strength of Locastro’s game. And that’s what he did Saturday, going 4-for-5 with a pair of infield hits, two runs scored and a historic stolen base. The run that the D-backs scored in the sixth was just about all Locastro. He beat out an infield hit to short to open the frame, stole second, went to third on a wild pitch and scored on a sac fly. The stolen base was the 28th straight successful steal to open his big league career, which surpassed Hall of Famer Tim Raines for the most consecutive successful steals to open a career since 1951. (Prior to ‘51, caught stealings were not tracked by the National League.)

[AZ Central] Tim Locastro’s spikes headed to Cooperstown after record-breaking night in D-backs’ win - “I paid to get them painted, and I wore them for two games, but it’s all worth it,” Locastro said. “The other day when I tied it, I sort of started to think about it a little bit too much and was trying to force some things here and there on the bases. I’m happy now I can calm down a little bit more.”

[Arizona Sports] Riley Smith holds steady in 1st career start with Arizona Diamondbacks - “Riley giving us six really solid innings and kinda setting the tone,” manager Torey Lovullo told reporters via Zoom. “Gave up some early runs but still continued to make pitches and keep us in the ballgame and allow us to play a little bit of catch-up.” After a 12-pitch first, Smith began to stumble in the second inning. The righty walked Eugenio Swarez, followed by a double and two singles that gave the Reds the lead. Smith eventually got out of the inning totaling 21 pitches after facing two more batters. Smith settled back in at the top of the third, throwing seven pitches to retire the side, and held steady allowing just five hits through the next three innings. The 26-year-old took the mound with a large group family members from Texas watching from the stands — a huge moment he called exciting and surely one he will never forget. “I always dreamed of pitching in the big leagues, but part of that dream was for my family to be there when I pitched in the big leagues,” Smith said via Zoom. “For them to be able to come, not only was it a dream for them but it was dream for me.

[NBC Sports] J.D. Martinez placed on the COVID-19 injured list - Boston Red Sox outfielder/designated hitter J.D. Martinez has cold symptoms and was placed on the COVID-19 injured list. Martinez underwent coronavirus testing and the team is awaiting the results. Going on the COVID-19 IL does not require a positive test. If he tests negative twice, Martinez can return to the lineup for the series finale Sunday at Baltimore. “We feel pretty confident that he’ll be able to be with us (Sunday), but obviously we have to wait,” Red Sox manager Alex Cora said. Martinez has been of the hottest hitters in MLB to start the season. He is batting .433 (13 for 30) with seven doubles, two home runs and 12 RBIs. Martinez entered the day leading all major league players in extra-base hits with nine. He has also recorded at least one extra-base hit in all of his team’s first seven games of the year, making him one of five players in MLB history to accomplish that feat.

[MLB Trade Rumors] Rays Place Chris Archer On Injured List, Call Up Brent Honeywell - The Rays placed Chris Archer on the injured list after he left today’s ballgame. Brent Honeywell will be called up, and he will make his Major League debut opening Sunday’s game, per Marc Topkin of the Tampa Bay Times (via Twitter). It wasn’t clear at the time of the injury what exactly happened to Archer, but the injury was apparently severe enough to act quickly in placing him on the injured list. Today was just the second outing of the year for the 32-year-old. Archer suffered right lateral forearm tightness, per ESPN’s Marly Rivera (via Twitter), who adds that the Rays hope Archer will miss just one start. Honeywell has long been a top prospect for the Rays, but injuries have slowed his path to the Majors. Baseball America had him ranked among the Rays’ top prospects in every season since 2015. He landed in their top-100 prospects in baseball from 2016 to 2020, peaking at No. 14 overall before the 2018 season. Tomorrow will mark an incredible achievement for Honeywell, even if he is unable to become the star hurler the Rays once hoped. Still, expectations are high, and if Honeywell can stay healthy, he still is projected to become a capable piece of the rotation.

[ESPN] Los Angeles Dodgers’ Dave Roberts concerned that Trevor Bauer getting singled out by MLB - Los Angeles Dodgers manager Dave Roberts expressed concern that one of his star pitchers, Trevor Bauer, has been singled out in Major League Baseball’s renewed effort to curtail the illegal use of foreign substances on baseballs. Bauer’s name surfaced in a recent report from The Athletic saying that multiple baseballs from his Wednesday outing against the Oakland Athletics were collected for inspection after they were found to contain visible markings and felt sticky. Bauer complained about the report through his Twitter account and criticized MLB for leaking information about “a supposedly confidential process.” “My understanding is that umpires collect baseballs from all the pitchers, and balls that were in play, to collect samples,” Roberts said Friday morning before his team’s home opener. “That’s kind of what I get from it. I just hope that our player is not singled out. That’s the one thing I want to guard against.”