ABC News
Share on FacebookShare Share on TwitterTweet
It has been no secret the Dolphins have their eye on the seven-time premiership coach taking the reins when the NRL's 17th club enters the league in 2023.

The NRL's newest club, the Dolphins, are confident of recruiting Wayne Bennett as head coach for its inaugural season in 2023.

The NRL confirmed on Wednesday the Redcliffe-based Dolphins won the bid for its 17th licence, beating out the Firehawks and Jets to become the league's latest expansion club.

Bennett — a seven-time NRL/NSWRL premiership coach — had already been linked to the Dolphins' head coaching role before Wednesday's announcement.

The 71-year-old finished up with South Sydney following its grand-final loss to Penrith earlier this month.

Dolphins chairman Bob Jones said the new franchise backed its chances of snaring Bennett, who was the Brisbane Broncos' foundation coach in 1988.

Bennett 'not finished yet' 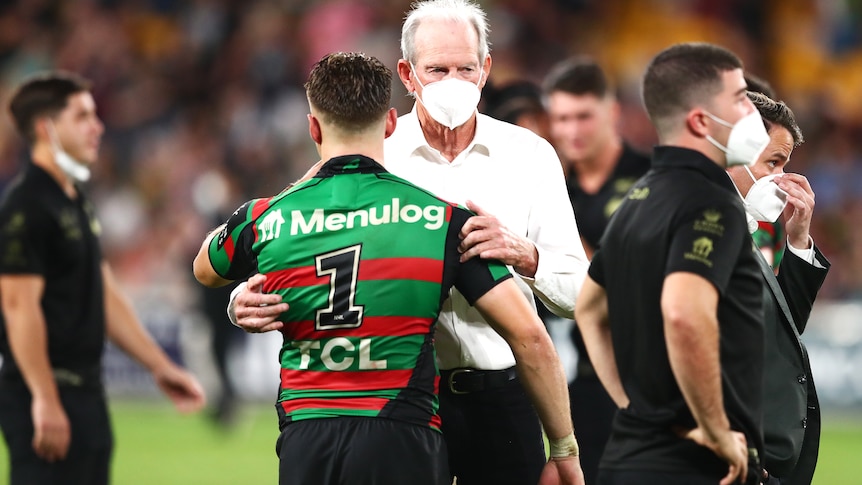 A defiant Wayne Bennett says he will wait for the pain of grand final defeat to subside before making a call on his next move, as his three-year stay at South Sydney comes to an end.

"We have spoken about having lofty ambitions and wanting to be the best in the land," he said.

"I would think that if Wayne is not the best in the land he is right up there.

"We have reached out to Wayne and those discussions are progressing nicely and hopefully in the next little while we will know what is happening."

If Bennett does become the Dolphins' head coach, the experience is set to be vastly different to when he guided the Broncos in their inaugural season 33 years ago.

Twenty of his 24 players at the Broncos in 1988 came directly from the Brisbane Rugby League competition.

"We have looked at the depth of players, the state cup and over time a team developing their own talent and the natural market-place movement," Abdo said.

"They (Dolphins) have demonstrated to us how they would go about building a team and who they would contract first up from a non-playing perspective to help them go about contracting.

"It's a very detailed plan on how that will get built and what parameters they will operate in."

But Abdo said the Dolphins would not be given any concessions in the manner in which the AFL set up its expansion clubs GWS and Gold Coast.

"We are very different to other sports. We think about expansion differently," he said.

"This is not an exercise in us providing significant assistance from the centre, financial or through concessions or otherwise.

"Expansion needed to happen when we believe we can have a team that can compete from year one, from 2023."

The expansion club would drop all references to Redcliffe or Brisbane from its name after last-minute talks left them known solely as the Dolphins. The NRL says the key to the success of the Dolphins' bid to be the 17th league franchise from 2023 was its focus on growing the game in the northern Brisbane corridor.

As recently as this week bid chief Terry Reader had confirmed the club would speak to its fans over a possible geographical name to go alongside its mascot.

Jones also claimed on Wednesday what they put after the Dolphins moniker was still "open for discussion" and had not yet been decided.

But Abdo said the new club would join the Warriors in not having a geographical label, in a bid to appeal to a larger area.

"It's the Dolphins. That's what we decided together," Abdo said.

"That is part of the discussions we had with them very recently.

"It's important for us we have a say in this, because this is about the growth of the game and we want an overall strategic lens to this."

The Dolphins' inclusion in the NRL will give the league 12 extra matches and extend the regular season to 26 rounds.

They will wear red and white — the traditional colours of the Redcliffe Dolphins — and play as many as seven matches out of Brisbane's Lang Park.

The Dolphins anticipate playing the rest of their matches out of their north-east Brisbane base of Redcliffe and Sunshine Coast.

The club has a proud history, having entered the Brisbane Rugby League in 1960.

The likes of Arthur Beetson played for the Dolphins, while the club owns its stadium in Redcliffe, as well as a shopping centre.