Kawhi Leonard Was Putting Up A Postseason For The Ages 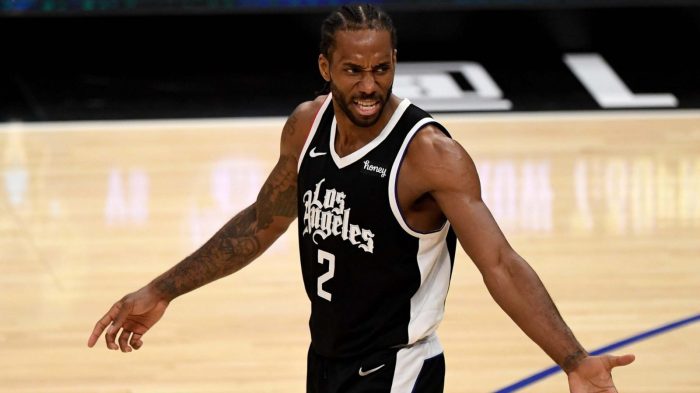 What started as a routine-looking transition drive by Kawhi Leonard late in his Los Angeles Clippers’ series-tying Game 4 win over the Utah Jazz could have serious implications for the NBA title chase. Though Leonard stayed in the game for another minute after planting awkwardly on his right knee, he sat out L.A.’s Game 5 win and may miss much more time, with the Clippers fearing that Leonard had suffered an ACL injury of some severity. While further tests on Leonard’s knee are pending, it could be yet another piece of bad news for a franchise that is no stranger to postseason suffering.

The Clippers have had their up-and-down moments in these playoffs, barely surviving the Dallas Mavericks in the first round and dropping the first two games to Utah before storming back, winning their third straight on the strength of Paul George’s 37-point double-double Wednesday night. But through it all, there’s no questioning how great Leonard has been during this postseason run. Leonard has scored 40.0 points per 100 team possessions for which he’s been on the court, joining an elite club of only 21 players (with a minimum of 400 minutes) who can lay that claim in any postseason since the ABA-NBA merger in 1976. And among those players — a list that includes a who’s-who of megastars such as Michael Jordan and LeBron James — nobody produced more efficiently than Leonard, who has created 1.35 points per possession that he personally had a hand in:

This kind of thing isn’t necessarily new for Leonard, of course. Ever since he made his leap from a key cog in the San Antonio Spurs’ machine to a perennial MVP candidate, he has scored 38.0 points per 100 team possessions and produced a hyper-efficient 1.24 points for each possession he individually commanded. But you could make a case that this year was shaping up to stand tallest among Leonard’s playoff seasons — even compared with his Finals MVP campaigns of 2014 and 2019.

That’s why it’s so disheartening to see Leonard’s 2021 postseason in jeopardy. The Clippers have ridden Leonard’s scoring to the No. 1-ranked offense in these playoffs, and his defense has helped cover for some of his teammates’ deficiencies as well. Without him, they are significantly less of a championship threat.

It’s true that Los Angeles was able to win Wednesday despite the immense pressure on George to carry the team in Leonard’s absence. But the Clippers still need one more win to finish off a tough Utah team, and then they would have the red-hot Phoenix Sunswho is out indefinitely under the NBA’s COVID-19 protocols.

">1 waiting for them in the conference finals. George has certainly lived up to his “Playoff P” nickname thus far in the 2021 postseason, scoring 33.2 points per 100 team possessions while creating 1.17 points per possession he’s personally taken responsibility for. But neither number is as dominant as Leonard’s have been, which is part of why our RAPTOR metric thinks George has been worth nearly 3 fewer points per 100 possessions to the Clippers’ bottom line than Leonard has been in the playoffs.

The big question now is how much time Kawhi will miss — which is why so much is riding on his specific diagnosis. If it’s a sprain, he might be able to return at some point in the postseason; any kind of tear is much worse news. Either way, it’s just the latest case of a devastating star injury in an NBA playoffs that’s been much too full of them — and the latest potential roadblock between the Clippers and the championship they’ve been seeking for so long.

Check out our latest NBA predictions.