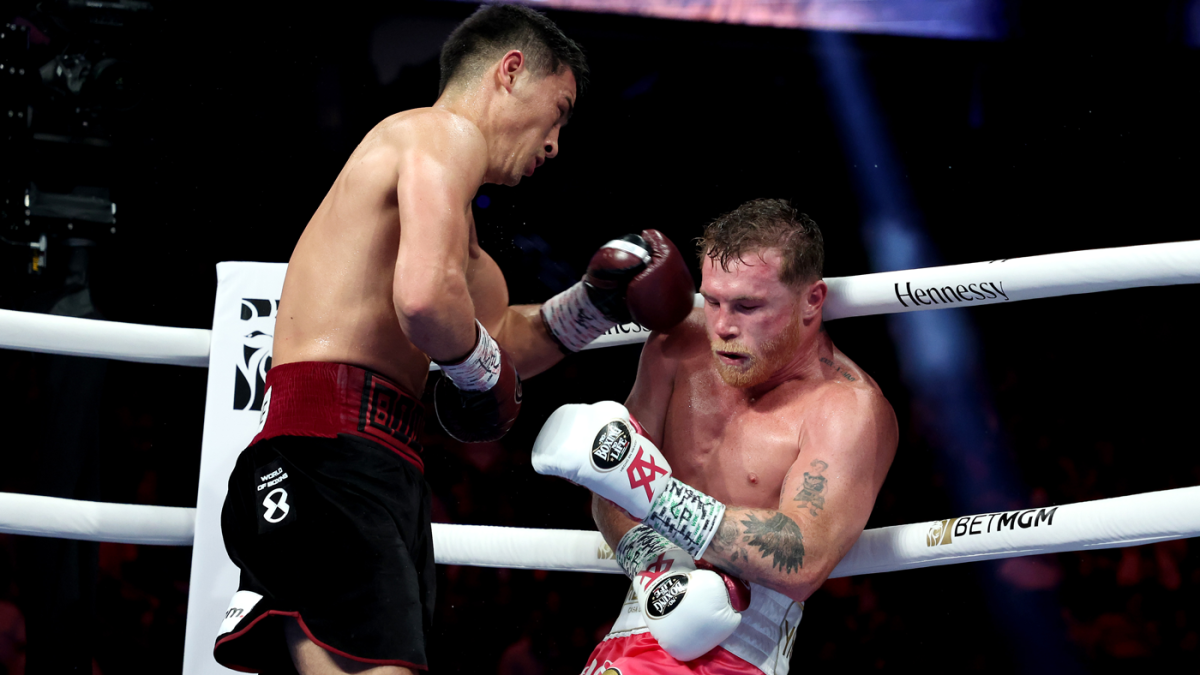 Canelo Alvarez's lofty ambition finally caught up with him on Saturday as the pound-for-pound king met his match in the form of unbeaten WBA light heavyweight champion Dmitry Bivol.

Alvarez (57-2-2, 39 KOs), a four-division champion, landed a career-low 84 punches overall overall 12 rounds as Bivol (20-0, 11 KOs) relied on his defense and accurate punching to pull the upset via unanimous decision inside T-Mobile Arena in Las Vegas. All three judges scored it 115-113 for Bivol in a fight that appeared anything but competitive as CBS Sports scored it 119-109 in favor of Bivol.

"I'm sorry I ruined your plans [for a fall trilogy fight against] Gennadiy Golovkin, maybe," Bivol said. "Congrats to [Alvarez], he's a great champion and I respect him. But if you don't believe in yourself, what do you do? You won't achieve anything. I believe and my team believes."

Can't get enough boxing and MMA? Get the latest in the world of combat sports from two of the best in the business. Subscribe to Morning Kombat with Luke Thomas and Brian Campbell for the best analysis and in-depth news, including instant analysis to Bivol's shocking win over Alvarez on Saturday night below.

Six months after becoming the first undisputed super middleweight champion of the four-belt era, Alvarez moved back up to 175 pounds for the first time since claiming the WBC title via knockout from Sergey Kovalev in 2019. But during the same week he teased a possible future move to heavyweight, Alvarez was unable to break through the technical strength of Bivol, a former Russian amateur star whose strength is muting the offense of his opponents.

Bivol's jab was on point throughout and he consistently responded to any single punch landed by Alvarez with clean combinations in return. Bivol allowed Alvarez to stand at close range in front of him but never gave him a clean enough strike zone to land upon.

Most of the damage Alvarez did connect on was to the left shoulder and arm of Bivol, who stayed firm behind his high guard.

"I felt his power. As you can see from my arm, he beat my arm up but not my head," Bivol said. "It's better. He had a good speed and power. Maybe his mistake was he threw only hard punches. After hard punches, he relaxed and tired.

"I was feeling great. This was the biggest fight of my career and I enjoyed this fight. When the people booed me, it gave me more energy."

Alvarez, whose previous lone defeat came against Floyd Mayweather in 2013, connected on just 17% of his punches against Bivol and was outlanded by a margin of 152 to 84, according to CompuBox. He also told reporters after that he thought he was ahead on the scorecards heading into the final rounds.

"He's a great champion. Sometimes in boxing, you win or lose. I lost today and he won," Alvarez said. "He's a really good fighter. He's a fighter who comes in and goes out. I also felt his power. It was a good victory for him."

After the fight, Alvarez shared hopes for a rematch, to which Bivol seemed willing.

"A rematch? No problem. Let's talk about a rematch," Bivol said. "I took this fight because I just wanted the opportunity and I appreciate the opportunity. I am ready for the rematch, I just want to make sure I win and am treated like a champion now."

For now, it's unclear what comes next for Alvarez. The undisputed super middleweight champion was expected to face Gennadiy Golovkin in September to complete their trilogy, but a potential rematch with Bivol could be in play, as could another contender at either middleweight or super middleweight. One thing is for sure, however, this was Bivol's night and he'll be able to celebrate in kind.

CBS Sports will be with you throughout the night in Las Vegas, so be sure to follow along with the live results and highlights below.